Latest News
Home /Storms bring rain and gusts to Triangle, but no severe weather so far

Raleigh, N.C. — The Triangle is under a level 1 threat for severe storms Thursday before much colder temperatures move in. After two days of chilly weather, though, springlike temperatures will return.

A line of storms moved through the Charlotte area around 10 a.m. By lunchtime, the storms arrived in the Triangle, bringing rain and some gusty winds, but fortunately no severe weather, lightning or hail.

The first moved through the Triangle around noon, while the second could move in around 3 or 4 p.m. The best chance for storms will be in the afternoon with most action south and east of the Triangle.

By 12:15 the first line of storms had passed through the Triangle, with rain trailing behind it. Fayetteville, Benson and Dunn were next in the path.

By 2 p.m. the heavy rain is predicted to hit Fayetteville and Goldsboro, while growing lighter in the western counties.

“We’re not going to finish with this until after–or during–the evening commute,” said Gardner.

The level 1 severe risk was shifted a bit farther south than earlier models.

Gardner said a few of the storms could be close to severe, with gusty winds and heavy rain posing the greatest risk, but severe weather is not likely.

The band of storms is the same one that has caused destruction in Tennessee, where a hillside collapsed, roads were flooded and rivers were rising Tuesday after a day of heavy rains. There are much weaker this afternoon as they cross the state. 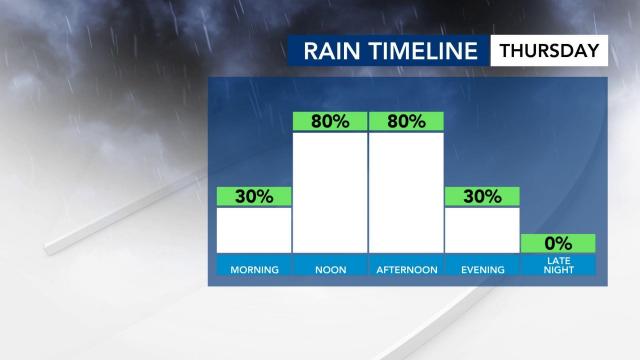 Once the storms have passed, temperatures will plummet into the upper 30s and low 40s.

Valentine’s Day, or Friday, will be a much colder day, especially compared to Thursday’s balmy temperatures. Raleigh’s high of 49 degrees on Friday will be around 20 degrees cooler than it was Thursday, and overnight temperatures will be even colder, with lows in the 20s.

Saturday will also be cold, with a high in the mid 40s. Both days will be sunny and bright before rain and warmer temperatures move in for Sunday.

Fans of warmer weather will be pleased to know that the cold weather this weekend will be very brief, and springlike temperatures will be back next week.

After Thursday, Triangle will see…

Storms may arrive in Triangle…

Storms, rain could move in…