WASHINGTON (AP) — President Donald Trump’s impeachment trial lurched into a final day of questions and answers Thursday before a crucial vote on calling witnesses — even as attention focused on a Trump attorney’s controversial defense and a Republican senator’s effort to expose the whistleblower who started the impeachment probe.

The vote on witnesses, expected Friday, could lead to an abrupt end of the trial with the expected acquittal. Or it could bring weeks more of argument and then testimony from former national security adviser John Bolton and others.

Senate Majority Leader Mitch McConnell opened Thursday’s session bracing for an attempt by Sen. Rand Paul of Kentucky to expose the name of the still anonymous whistleblower in the public trial. McConnell urged restraint by his colleagues.

But to no avail.

Paul quickly rose to put forward one of the first questions of the day, drawing a long pause in the chamber as Chief Justice John Roberts looked over the submission.

Said Roberts: “The presiding officer declines to read the question as submitted.”

The chief justice, who plays the rare role of fielding questions during te impeachment trial, had communicated through his staff to McConnell’s office that he did not want to read the whistleblower’s name, according to a Republican unauthorized to discuss the private conversation and granted anonymity. 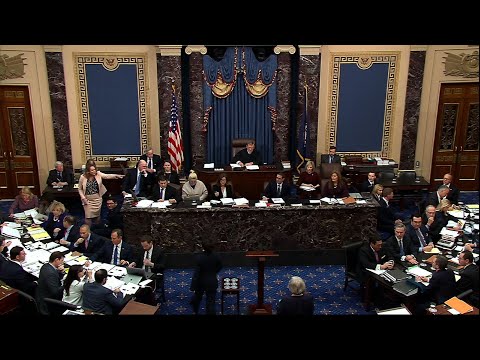 Paul promised to press on. His office said the senator believes “it is crucial the American people get the full story on what started the Democrats’ push to impeach President Donald Trump.”

In a day-after tweet, Trump attorney Alan Dershowitz, the defense attorney and former former college professor, complained about the portrayal of his testimony Wednesday night that a president, if he believes his re-election is in the “national interest,” is essentially immune from impeachment for actions in support of that idea.

That argument left even some of Trump’s top allies backing away.

“They characterized my argument as if I had said that if a president believes that his re-election was in the national interest, he can do anything,” the retired professor said Thursday. “I said nothing like that, as anyone who actually heard what I said can attest.”

Dershowitz testified to the Senate jurors late Wednesday that the quid pro quo charge at the heart of Trump’s impeachment — a trade of U.S. military aid for political favors — even if proven could not be grounds for his impeachment.

That argument was an abrupt turnaround from Trump’s own claim of “perfect” dealings with Ukraine.

One key Republican, Sen. Susan Collins of Maine, said only: “Yesterday was very interesting. That’s all I’m going to say.”

Meanwhile, Democrats are pressing hard to force the Senate to call more witnesses to testify, but Republicans appear intently focused on bringing the impeachment trial to a vote of acquittal, possibly in a matter of days. New revelations from former national security adviser Bolton are being countered by the president’s lawyers, who used Wednesday’s unusual question-and-answer session to warn off prolonging the proceeding.

House Speaker Nancy Pelosi warned Trump on Thursday that a sham trial is not acquittal of the impeachment charges against him.

“You can’t be acquitted if you don’t have a trial,” said Pelosi, arguing anew that Trump will be “impeached forever.”

Said Pelosi, ’I just pray that the senators will have the courage and the ability to handle the truth — rather than blocking the truth.”

Democrats argued Bolton’s forthcoming book cannot be ignored. It contends he personally heard Trump say he wanted military aid withheld from Ukraine until it agreed to investigate Joe Biden and his son, Hunter Biden — the abuse of power charge that is the first article of impeachment. Trump denies saying such a thing.

“All quid pro quos are not the same,” he retorted. Some might be acceptable, some not. “And you don’t need to be a mind reader to figure out which is which. For one thing, you can ask John Bolton.”

Trump faces charges from the House that he abused his power like no other president, jeopardizing Ukraine and U.S.-Ukraine relations by using the military aid as leverage while the vulnerable ally battled Russia. The second article of impeachment says Trump then obstructed the House probe in a way that threatened the nation’s three-branch system of checks and balances.

Democratic leader Chuck Schumer asked whether the Senate could really render a fair verdict without hearing from Bolton or acting White House chief of staff Mick Mulvaney, both potential eyewitnesses to Trump’s actions.

“Don’t wait for the book. Don’t wait ’til March 17, when it is in black and white to find out the answer to your question,” Schiff told the Senate.

The White House action could delay the book’s publication if Bolton, who resigned last September — Trump says he was fired — is forced to revise his draft.

GOP senators are straining to balance the new revelations with pressure for quick acquittal. They have been sternly warned by party leaders that calling Bolton as a witness could entangle the trial in lengthy legal battles and delay Trump’s expected acquittal.

In a Senate split 53-47 in favor of Republicans, at least four GOP senators must join all Democrats to reach the 51 votes required to call witnesses, decide whom to call or do nearly anything else in the trial.

One person watching from the sidelines Wednesday was Lev Parnas, the indicted associate of Trump lawyer Rudy Giuliani. Parnas arrived at the Capitol but could not enter the Senate with his court-ordered electronic-tracking device. He has turned over evidence for the investigation, and said he wants to testify.

Cyborgs, trolls and bots: A…